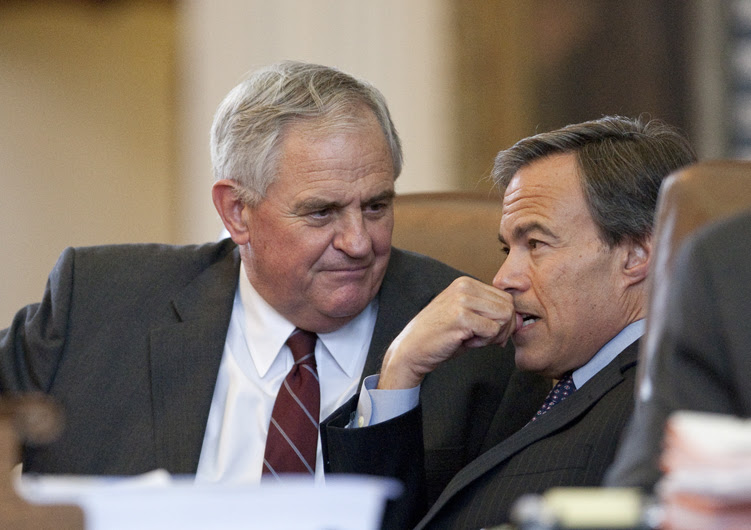 "Dishonest scales are an abomination to the Lord,
But a just weight is His delight."
Proverbs 11:1

What?!?  Joe Straus committee chairs having incestious relationships with special interests under the purview of their committee?!?  Perish the thought:

Despite strong public support, school choice will once more find vigorous opposition in the newly convened Texas Legislature. Conflicts over ideology, motivations–financial and professional–and even academic achievement are to be expected.

One relationship that could ruffle some feathers if Rep. Jimmie Don Aycock, R-Killeen, is again appointed chair of the House Public Education Committee is the one between him and his daughter, Michelle Smith, a prominent education lobbyist.

The public education industry presents formidable, often taxpayer-funded, opposition to many issues including school choice – and lobbyists are an important piece of that effort.

Since 2010, Michelle Smith has worked for Hillco Partners, a firm identified in a 2011 Texas Monthly article as “at the top of the lobby pyramid” since its 1998 launch. Up until this legislative session, Smith listed Raise Your Hand Texas among numerous other education establishment clients. Founded and well-funded by HEB’s Charles Butt, this education policy and advocacy organization is known as a staunch defender of public education and is specifically against school vouchers.

Smith is currently executive director of Fast Growth School Coalition, an organization whose stated mission is “to educate others about the impacts that rapidly expanding communities have on school districts.” FGSC wants more, not less, public dollars for its public school membership. School choice is seen to threaten not only existing, but also future funding.

For Smith, being Aycock’s daughter or a known education lobbyist has hardly been a secret. That other lawmakers are unaware of this relationship and the conflict posed defies credibility. And the Texas Legislature, when inclined, is no stranger to questioning the motivations of legislators or their lobbyist daughters.

Wikipedia defines a conflict of interest as: "a set of circumstances that creates a risk that professional judgement or actions regarding a primary interest will be unduly influenced by a secondary interest."  Clearly, the financial relationship between Chairman Aycock's daughter and the government 'education' industry is a 'secondary interest' that could 'unduly influence' the Texas House Public Education committee.  Give this incestuous relationship, shouldn't Chairman Aycock recuse himself from school choice bills?!?

Update: Earlier this morning, this author asked Chairman Aycock about this issue at a Texas Tribune event; to his credit, JDA said he would recuse himself in the event any bill effecting his daughter's lobby clients came before his committee.
Cahnman at 11:19 PM
Share