The 85th #TXLEGE and a "Conservative Texas Budget": Open letter to Texas Legislators.... 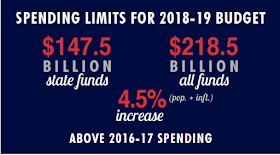 "There is desirable treasure,
And oil in the dwelling of the wise,
But a foolish man squanders it."
Proverbs 21:20

This morning, TPPF released the latest from their "Conservative Texas Budget" series, this time for the 85th legislature; long story short, the magic number is 4.5%. (*)

As long as you keep budget growth under that target, you won't have any trouble with this webstie.

To be fair, you not only stayed within the target last session, you actually stayed two points underneath it.  Do it again.  Feel free to go A LOT FURTHER....

But as long as you stay under  4.5%, we won't complain about the budget.

However, understand this: A two year budget that stays under the 4.5% inflation+population target is the absolute bare minimum of what voters expect from the 85th #TXLEGE.  Voters should reasonably expect a lot more.  Property tax appraisal reform, eliminating taxpayer funded lobbying, and constitutional spending limits would be a good place to start.

We gave y'all a "B" for the budget last session (alongside an "F" for structural fiscal reforms); as long as you stay under the 4.5% target, we will give you at least a "B" next session.

But we'd really like y'all to put yourselves in a position to receive an "A"....

* - TPPF can explain their report better than we can, but the short version is that holding total spending under the 4.5% target means we're holding it constant per capita.
Cahnman at 5:06 PM
Share