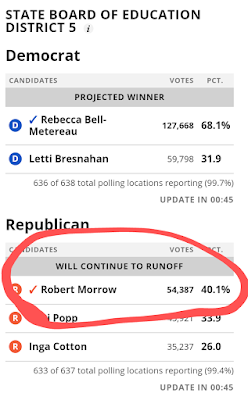 Only one appropriate reaction:

This was so OBVIOUSLY and COMPLETELY Predictable.

It began with that idiotic anti-Robert Morrow resolution the Travis County GOP passed six weeks ago.

At the time, nobody knew Robert Morrow was even running.  By passing that moronic resolution, the Travis county GOP gave Robert Morrow a week and a half of press coverage.  Political consultants have a phrase for that phenomenon: Earned Media.

Where this failure becomes really hilarious, however, is when you consider the fundraising for Robert Morrow's strongest challenger: 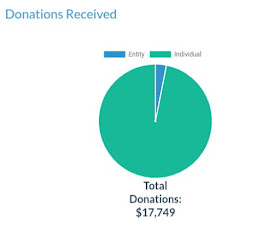 In a race where one candidate was getting tons of earned media, and the other candidate only raised $17 grand, the geniuses at the GOP decided to...help the candidate they didn't want to win get even more earned media.

You'd probably be looking at a different reality this morning.

[Note: We don't really want to get into it...but maybe, just maybe, Robert Morrow is the just desserts for 57 years of the Texas establishment's refusal to discuss the biggest open secret in the history of this corrupt state.]

Bottom Line: This was so completely preventable...but for the GOP to completely fail to prevent it is likewise completely hilarious.
Cahnman at 1:38 PM
Share