Do not be deceived: “Evil company corrupts good habits.”
1 Corinthians 15:33

In our post from a couple hours ago, we said that our expectations for the Governor's widely hyped announcement this afternoon were low.

But we weren't expecting this:


Abbott also named a "statewide strike force" devoted to developing reopening procedures. Austin banker James Huffines will chair the task force, while veteran lobbyist Mike Toomey will be its chief operating officer. The group will oversee what Abbott described as a phased reopening.

Mike Toomey, for those who don't remember, was this guy:


The most dramatic moment of the GOP debate in Florida last Monday revolved around Gov. Rick Perry and his 2007 executive order mandating that all 11- and 12-year-old girls in Texas get the HPV vaccine. The human papillomavirus vaccine protects women and teens against a sexually transmitted disease that causes cervical cancer.

"The governor's chief of staff was the chief lobbyist for this drug company," Bachmann said. "The drug company gave thousands of dollars in political donations to the governor. This is flat-out wrong. Was this about life, or was it billions of dollars for a drug company?"

Back in 2007, the first reaction to Perry's executive order was mystification on both sides of the political aisle.

It emerged that Merck's political action committee had donated $5,000 to the governor's campaign at the same moment their executives were negotiating with the governor's staff. Merck would eventually donate nearly $30,000 to Perry and more than $377,000 to the Republican Governors Association, which Perry chaired. 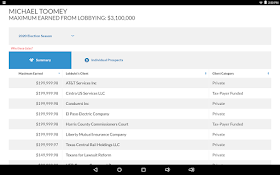 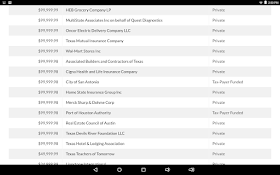 Keep in mind, this only covers recent time periods.  This doesn't say anything about lobby clients further in the past.  Or, potentially, future lobby clients (wink, nod).

Even so, you have insurance companies, grocery stores, construction interests, local governments, medical device companies, and (imagine that) Merck.

Basically, every industry that's been getting special treatment this entire time.

Also, while we have no specific knowledge, it wouldn't surprise us if deeper direct conflicts of interest exist.