The Head of the Lower Colorado River Authority is making...HOW MUCH?!? 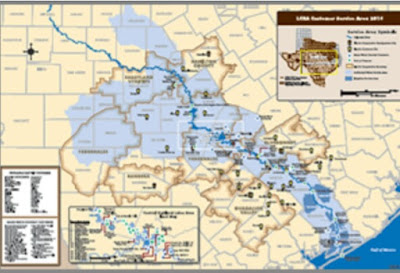 "There is desirable treasure,
And oil in the dwelling of the wise,
But a foolish man squanders it."
Proverbs 21:20

Apparently, this story is almost a week old, although we just saw it:


The acting head of Texas’ massive health and human services bureaucracy, who is leading a 36,600 employee agency during a global pandemic, is also working a second job as the well-paid general manager of the Lower Colorado River Authority, a quasi-state agency — funded without state tax dollars — that provides water and electricity to more than a million Texans.

And despite temporarily heading one of Texas’ largest and most high-profile agencies, acting Executive Commissioner Phil Wilson is not on state payroll. Instead, he continues to earn $636,694 from the river authority, more than double what the previous health commissioner made.

The Trib article goes on to discuss the appropriateness of Phil Wilson working both positions.  That's certainly a valid question.  It probably isn't appropriate.  But we admit it's a complicated discussion.
Can we take a second, however, to ask why the head of a friggin' river authority is making over $600k in the first place?!?

As a matter of comparison, that's more than any school district superintendent makes. And, to be fair, most of the larger school districts have over 10,000 employees. LCRA, by contrast, has under 2000.
Then there's this gem:

Wilson has had a long career in and around state government, at least once making news for out-earning predecessors in the same positions. As executive director of the Texas Department of Transportation, his starting salary was $100,000 more, 50% higher, than the previous head. Wilson was also deputy chief of staff to Gov. Rick Perry, who appointed him secretary of state, and worked as a lobbyist and corporate officer for Irving-based Luminant, an electricity generator.


Bottom Line: Even by the standards of legal political corruption in the state of Texas, this is still real money.
Cahnman at 1:52 PM
Share