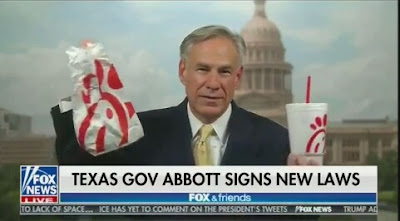 "David said furthermore, 'As the Lord lives, the Lord shall strike him, or his day shall come to die, or he shall go out to battle and perish.' "
1 Samuel 26:10

I would like to make one final point which concerns contract tracing. The MTX contract must end promptly. It is a gross invasion of personal liberty and privacy. I also have serious concerns it violates HIPPA and other medical privacy laws. Why is Texas spending nearly $300 million of taxpayer money on tracking Texans for two years over this? Though it may be federally funded, every dollar spent by local, state, or the federal government either comes from current taxpayers or the children or grandchildren of taxpayers through debt service. Therefore, we could have forgone the federal funds, saved taxpayer dollars, and not conducted privacy-infringing tracing.

[Note: While the scope of this blog post is limited to the so-called "contact tracing" boondoggle, Tinderholt's full letter is brutal.]
Bob Hall:

“Contact tracing is technically wrong, as it may be an effective tool to trace slow moving deadly viruses such as Ebola or Tuberculosis, but not for a fast-moving virus with a low death rate that is primarily spread by asymptomatic people.

“Contact tracing, for COVID-19, is a colossal waste of money which could be better spent on resources to protect the elderly and immune-compromised populations that are the most affected. Contact tracing will shred our constitutional rights to privacy.

“Texas must stop contact tracing and change course by adopting new policies consistent with the facts as we now know them...."

State Reps @RepMattKrause and @James_E_White have called for termination of @MTX_Inc’s $295m contract for contact tracing. Anyone else out there doing same? My DMs are open https://t.co/K1mzSZto2r


It's not a full statement, but this retweet from Donna Howard's certainly suggests discomfort with the contract.
All of which is really, really, interesting.
Obviously, we've been around the block several times.  We know that the legislature often talks a big game during the interim, then fails to follow through once they get the chance.  Still, this is not a good place for a Governor to be heading into the most difficult session in awhile.
If Abbott's smart, he'll cancel the contract (and fire Mike Toomey).  Whether or not he is smart remains to be seen.  That being said, it wouldn't surprise us to see that announcement as a Friday afternoon document dump this week or next.
Bottom Line: The long term fallout remains to be seen, but the bloom is certainly off the rose in a way it hasn't been previously.
Cahnman at 1:41 PM
Share