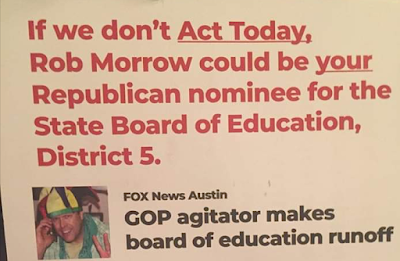 Back in March, we wrote the following about Robert Morrow's surprisingly strong primary showing:

In a race where one candidate was getting tons of earned media, and the other candidate only raised $17 grand, the geniuses at the GOP decided to...help the candidate they didn't want to win get even more earned media.

You'd probably be looking at a different reality this morning.


Having seen their anti-Morrow strategy backfire spectacularly, one would think the GOP might try something different. But one would be wrong. How pathetic.

To be fair, we have seen some effort to build positive name ID for whatshername, the chick running against Morrow. But those efforts have been super half assed scattershot at best. Instead, we've mostly gotten mailers like the one pictured above. And don't get us started on this dumpster fire of a website.

Honestly, at this point, we don't care. Our only interest in this race is that we find Robert Morrow's ability to torment the Texas GOP to be really, really, funny. Our only regret is that nobody got Morrow asking Karl Rove about Jeff Gannon on video.

Bottom Line: What is it they say about trying the same thing over and over again expecting a different result?!?
Cahnman at 4:55 PM
Share