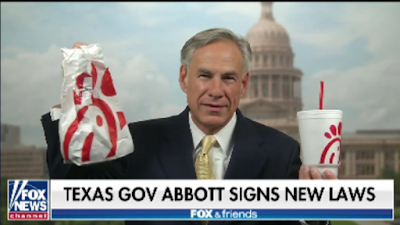 "The heart of him who has understanding seeks knowledge,
But the mouth of fools feeds on foolishness.
Proverbs 15:14

Gov. Greg Abbott was on the receiving end recently of some jokes about his use of a wheelchair — and his alleged kowtowing to liberal Texas cities on COVID-19.

But Greg Abbott, being notoriously thin-skinned, can't abide discussion of Greg Abbott's job performance.  Greg Abbott has to play Mr. Burns to a revolving cast of legislative Smithers'.  The Empower Texas kerfuffle just gave Greg Abbott a pretext to do what Greg Abbott always wanted to do.

But here's the thing: Abbott's not actually doing much.

(Which is, of course, typical for Abbott.)

The governor’s political operation, conceded “endorsements are not the silver bullet or anything.”

In all of the races, Texans for Greg Abbott will deploy “digital advertising to our universe, texting to our folks and emails” — but not radio or cable-TV ads, Carney said. Turnout is likely to be low, he added.

“Hopefully, they’ll get out there and vote and support the governor’s candidates,” Carney said.


Soo...they're going to send a bunch of spam text messages. People hate those.  But keep on keeping on Dave Carney.

Speaking of Dave Carney, that quote is astonishingly weak. "Hopefully?!?"   Hopefully, lots of stuff happens.  But it usually helps to have a plan beyond spam text messages.

Then there's this: Why run your mouth in the first place?!?

A mob boss who knows how to keep his mouth shut only needs to whack one enemy from time to time to be feared.  But a mob boss who says he's going to whack four specific people on a specific timeline...better whack all four (on time).   Anything less looks weak.

In other words, Abbott better run the table.

Anything short of that is a loss.

Bottom Line: This is an awfully high-stakes fight to pick to not have a plan beyond Dave Carney, spam text messages, and the word "hopefully."
Cahnman at 3:46 PM
Share