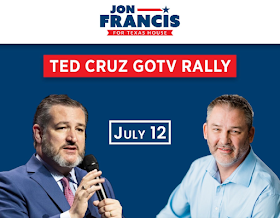 "A man who has friends must himself be friendly,
But there is a friend who sticks closer than a brother."
Proverbs 18:24

“Ted Cruz is a conservative outsider who knows what it’s like to be an underdog and defeat the establishment favorite,” said Francis. “We’re excited to energize conservatives across House District 60 with this one of a kind special event ahead of this important election.”

Cruz, the conservative firebrand, endorsed Francis for the State Representative position in the primary, but is now heading into the district to stump for Jon personally in the July 14 Republican Primary Runoff Election.

“If anarchists, leftists and marxists can pillage major cities across America in strong numbers, I can pretty much guarantee conservatives will show up for our rally and head to the polls at full strength on Election Day,” said Francis.

The rally is set to be held at the beautiful, new event venue, La Bella Luna in Hood County on Sunday, July 12. The 2:00 PM afternoon gathering will be totally free of charge for a general admission ticket; however, seating is limited and will be filled on a first-come, first-serve basis. The Jon Francis Campaign highly encourages potential attendees to RSVP as soon as possible in order to secure their seat. Tickets are required for entry to the rally.

Francis made headlines in his announcement by pledging to only take contributions from individuals in his campaign and not a dime from lobbyists or PACs.

In other words, Abbott's endorsement of Jon Francis' opponent had no impact on Ted Cruz.  This is interesting for a whole host of reasons (have Cruz and Abbott ever been on opposite sides of a primary before?!?).  But the most interesting aspect is what says about the Empower Texans kerfuffle.

Which is, for the most part, nothing.

Obviously, a cynic would argue that Ted Cruz wants to remain in the good graces of the Wilks family for a future presidential run. Of course, the cynic is completely correct. But that's the point.
Had the Empower Texans kerfuffle had the impact their enemies' had hoped, Ted Cruz wouldn't get anywhere near Jon Francis. Which shows you the long-term impact of the Empower Texans kerfuffle.

In a word: Bupkus.

(Except for the fact that Abbott now needs to run the table.)

Bottom Line: If anything had materially changed in the past ten days, this event wouldn't be happening. But it IS happening. Sorry phony outrage crowd.
Cahnman at 11:07 AM
Share